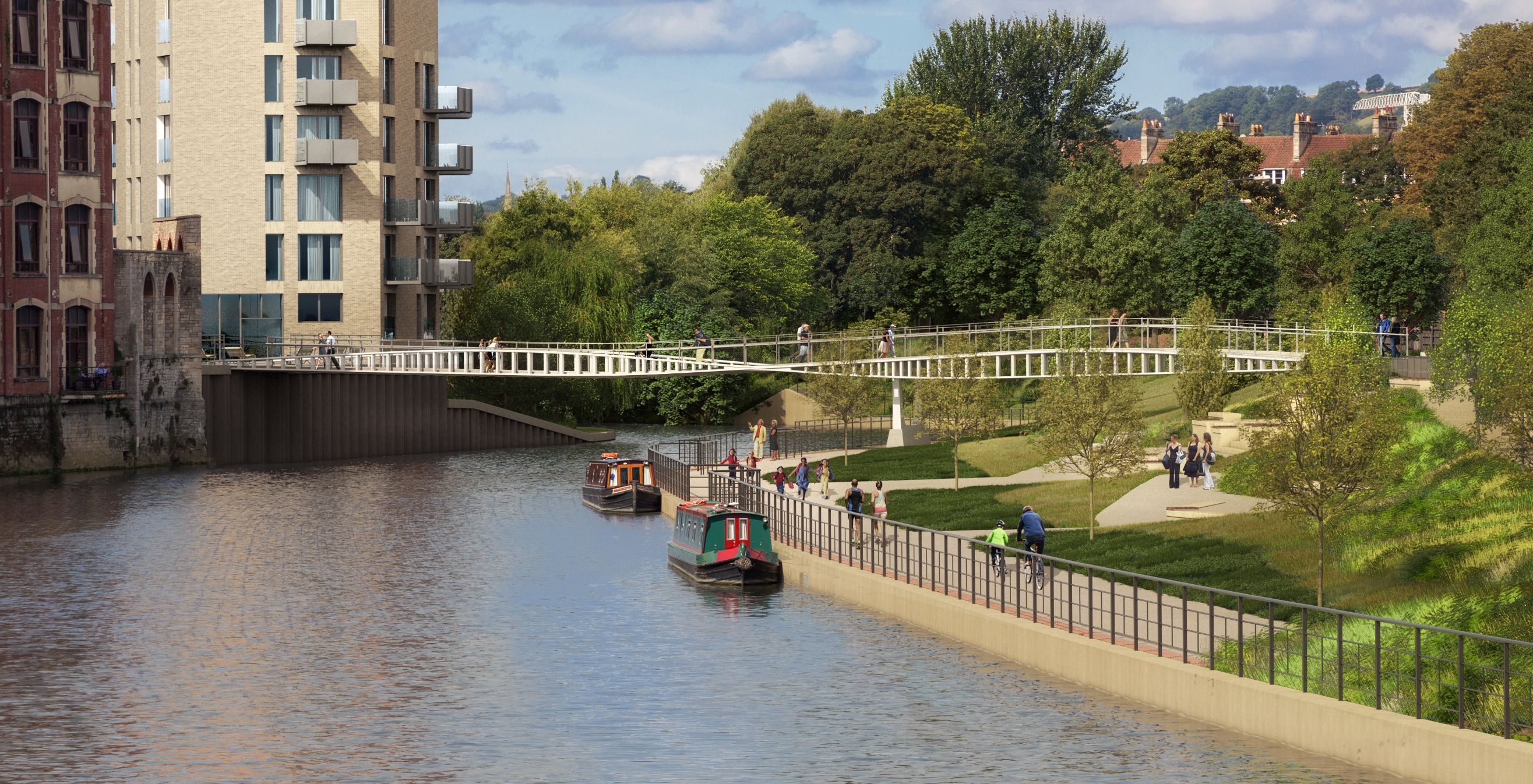 The next milestone in the creation of the first new crossing point to be installed across the River Avon in Bath for a century will be completed next month.

The superstructure of Bath Quays Bridge, a 60m long steel bridge which will link Bath Quays North and South and provide a new route for pedestrians and cyclists, will be lifted into place at the beginning of November.

The Bath Quays development is Bath & North East Somerset Council’s flagship regeneration project and the bridge is an integral part of scheme, providing greater connectivity in the city. The four sections of the superstructure arrived in the UK in May after having been fabricated in Belgium and have since been assembled into two spans on site.

The council is warning residents and visitors of upcoming travel diversions and temporary signalling around the site from the end of October, due to a 600-tonne crane being needed for the lift operation.

The A367 Green Park Road will be closed overnight from 7pm on October 26 until 6am the next day while traffic management is installed for preparatory works for the crane lift, with a signed diversion in place.

Temporary traffic lights reducing Green Park Road to single-lane only will then be operating from October 27 for up to eight weeks followed by a further night-time closure and diversion of the A367 allowing all traffic management to be removed and two-lane running to be reinstated.

During the lift the top level of Avon St multi-storey car park will be closed with the rest of the car park remaining open. Other restrictions will be in place in the immediate vicinity of the site with marshals on hand to help direct pedestrians.

The towpath along the river is expected to be closed soon with a signed diversion route for pedestrians and cyclists.

Councillor Tim Ball, cabinet member for Housing, Planning and Economic Development, said: “The next step in the installation of this remarkable bridge is an exciting milestone as it is an integral part of the whole Bath Quays development. However, lifting the two sections of the bridge into place is a major undertaking that means there will be some traffic disruption due to the size of the crane needed. We apologise for the inconvenience and would like to reassure residents and businesses that we have worked hard to keep this to a minimum. I am looking forward to seeing the bridge in place and being used by pedestrians and cyclists to get around the city more easily.”

“Due to Covid-19 and the guidelines in place to protect public health, we would ask that people do not gather to view the works in order to keep themselves and others safe.”

Paris-based engineering and architectural consultancy Marc Mimram designed the bridge after winning an international design competition commissioned by the council in 2015 and securing the largest number of votes in a public poll. The detailed design and engineering checks required for the complex structure involved a number of engineers across the region.

The structure was built in Belgium by steelwork fabricator Victor Buyck.  A number of UK-based contractors took part in the procurement process, but Buyck was appointed in January 2019 because the company presented the best expertise, resources and capacity to make the complex structure to a high quality, therefore offering the best value to the council. The bridge was shipped to the UK in four sections in May.

At the end of October, residents will be invited to put forward their suggestions for a name for the bridge. A panel of nine community representatives will compile a shortlist with the best two submissions being put to a public vote.

Bath Quays will create up to 2,700 new jobs, space for local and new businesses, at least 130 new homes, a waterside park and new cafés and restaurants. It is part-funded by the West of England Local Enterprise Partnership through the Local Growth Fund and administered by the West of England Combined Authority (WECA). Find out more about the development here