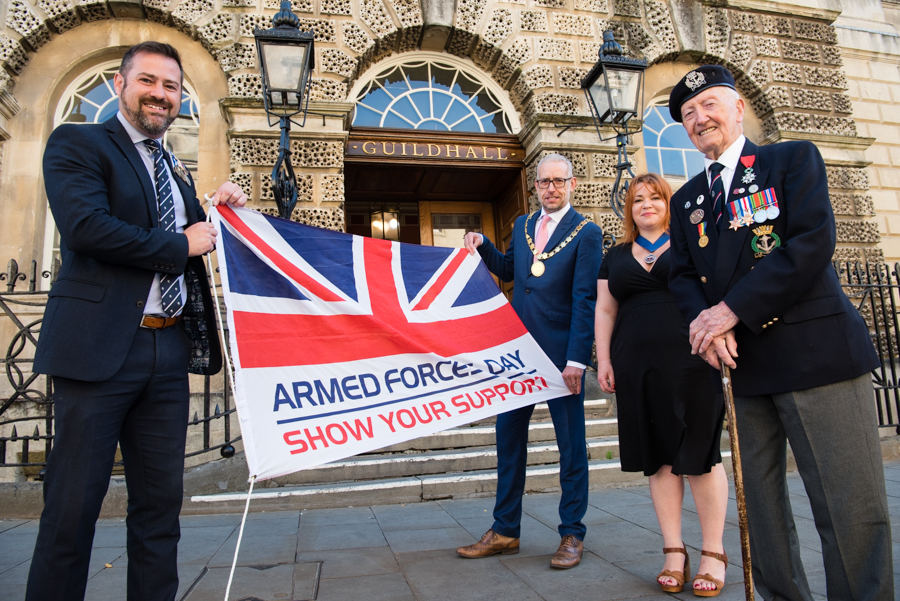 Bath & North East Somerset Council is celebrating the national annual event taking place on June 25 with the raising of the flag at the Guildhall today (June 20).

Armed Forces Day is an opportunity to show support for currently serving troops as well as service families, veterans and cadets.

This year’s event will see more than 150 events take place across the country.

The raising of the flag in Bath was attended by regiments from across Bath & North East Somerset including 43rd (Wessex) Signal Squadron; the Royal British Legion; the Chair of the council, Councillor Shaun Stephenson-McGall; the Deputy Mayor of Bath, Councillor Michelle O’Doherty and council Leader, Councillor Kevin Guy.

Councillor Guy said: “As a veteran, Armed Forces Day has personal significance because it gives us all the chance to show our support for the men and women who make up the Armed Forces community. I’m pleased to see the flag flying above the Guildhall as a mark of respect to the community and to highlight this significant day.”

Along with all other local authorities Bath & North East Somerset Council has pledged to uphold the Armed Forces Covenant, which is a promise by the nation that those who serve or have served, and their families, are treated fairly.