Final sections of bridge superstructure touch down in Bath 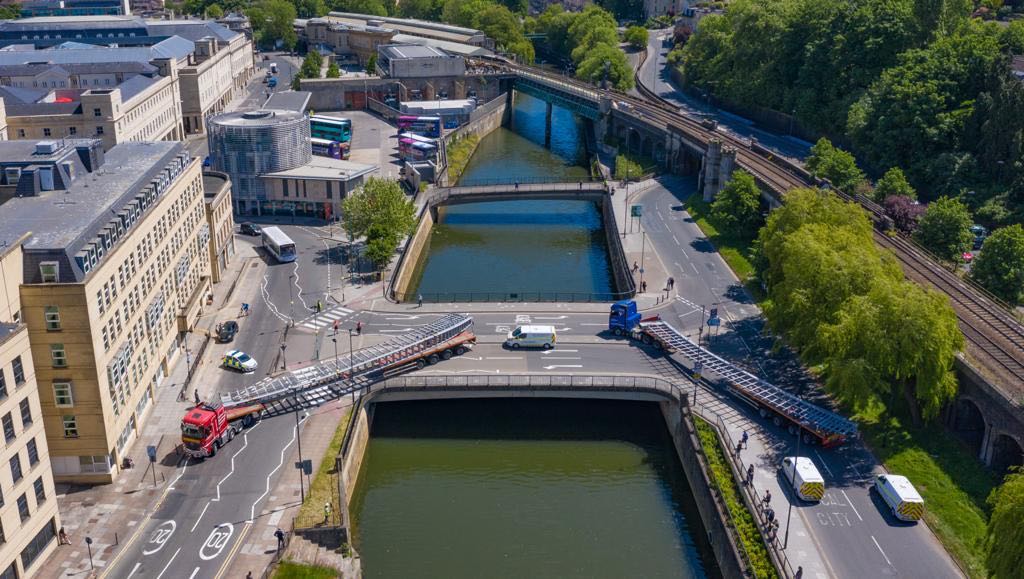 The last two parts of the Bath Quays bridge superstructure have arrived in Bath from Belgium – and residents will soon be invited to name the bridge in a new online competition.

The vehicles which arrived today (19 May) follow the delivery of the first two sections of the bridge last week and travelled via the same route on the Zeebrugge-Tilbury ferry, with police escort on arrival in Bath due to the width of the vehicles.

Once completed the 60m long steel bridge will be the first new crossing point over the River Avon in Bath for 100 years, providing a new route for pedestrians and cyclists and greater connectivity around the city.

Bath & North East Somerset Council will launch a bridge naming campaign next month inviting residents to submit their suggestions online. A panel of nine community representatives will compile a shortlist with the best two submissions being put to a public vote before the name is announced at the end of 2020.

The bridge, commissioned by the council following an international design competition, has been made by Belgian steelwork fabricator Victor Buyck who will also install the bridge later this year.

Councillor Tim Ball, cabinet member for Housing, Planning and Economic Development, said: “Bath Quays bridge is an exciting development for Bath that will allow pedestrians and cyclists to move around our city more easily by connecting the riverside with the city centre. We are developing long-term changes to the way people commute and the bridge will support a move towards more walking and cycling. This significant new landmark will need a special name, so I’d encourage residents to get involved in our naming campaign when it launches next month.”

West of England Mayor Tim Bowles said: “This new bridge funded through the Local Growth Fund will support my ambition to see more people cycling and walking in the West of England. This installation is a welcome addition to the Bath Quays development and will connect up more business space for commuters when the bridge opens next year.”

Prof Steve West, Chair of the West of England Local Enterprise Partnership, said: “It’s really good to see how the Local Growth Fund is helping to move forward with this latest stage in the development of the Bath Quays site. The new bridge is another piece of the plan to bring communities closer together in the future.”

Each part of the bridge has been placed on temporary supports by Victor Buyck before the four parts are welded together. They will remain there until the foundations have been completed and the bridge can be lifted into position using a 600-tonne crane.

The bridge design was selected via an international design competition commissioned by the council in 2015, with six short-listed designs exhibited to and voted on by the public. Following the exhibition, the panel evaluated the designs and selected Paris based engineering and architectural consultancy Marc Mimram's 'Between History and Modernity' as the winning design. The winning design was also the public's favourite.

Find out more about the bridge at https://www.bathnes.gov.uk/services/planning-and-building-control/major-projects/bath-quays-bridge