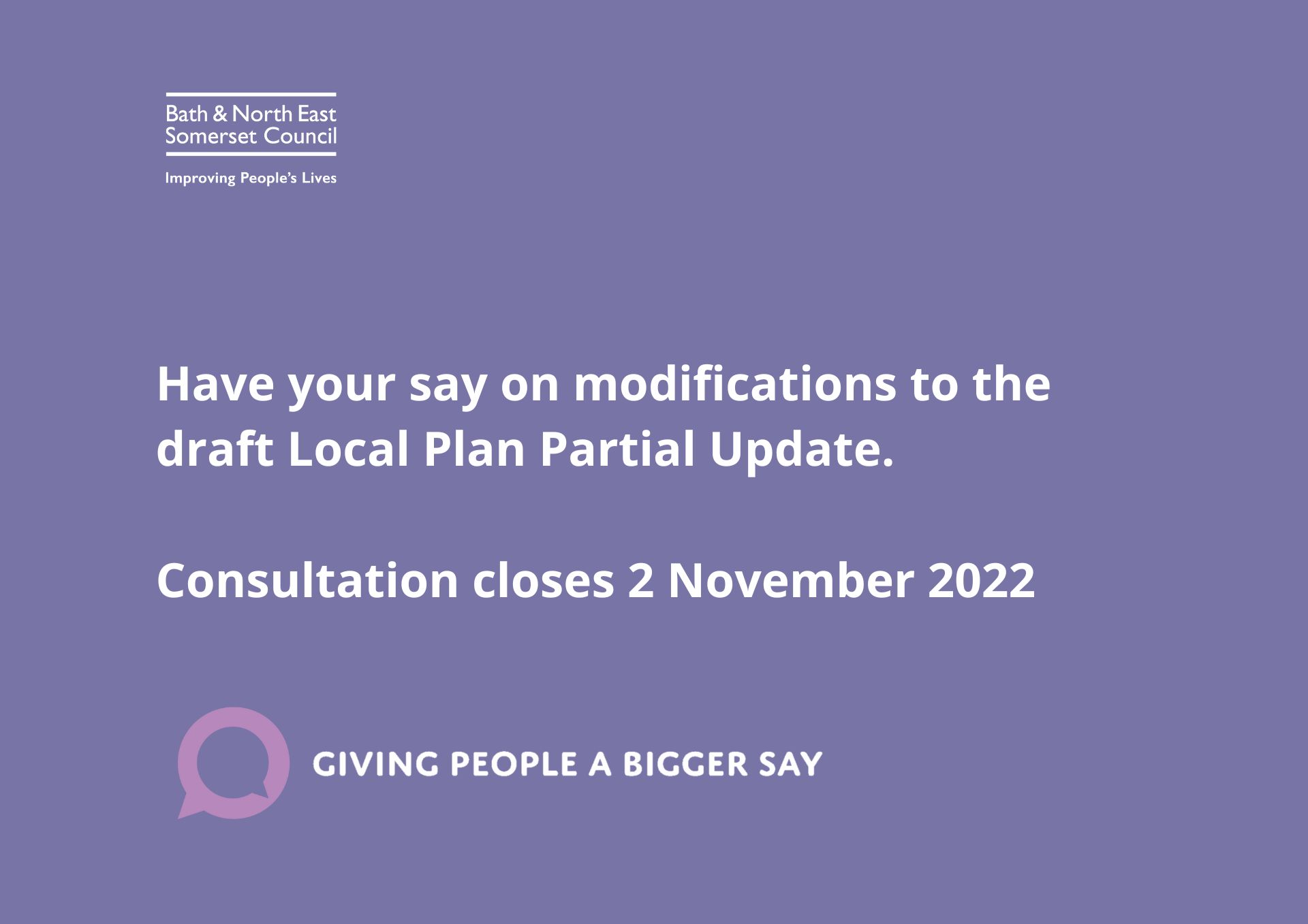 Changes to parts of the Local Plan, which sets out the basis for decision making on development and the use of land across the district, are being consulted on by Bath & North East Somerset Council.

The draft Local Plan Partial Update (LPPU) updates parts of the council’s current Local Plan, which runs until 2029, to better address critical issues and help deliver the council’s priorities, including addressing the climate and ecological emergencies and maintaining control over the future supply of new homes.

The draft LPPU has been through public engagement and consultation and has been examined by a planning inspector.

The inspector’s initial feedback on the draft LPPU was positive and his recommended changes, known as main modifications, are now subject to public consultation. It is the changes to the draft LPPU that people are being asked to comment on.

The main modifications that have been suggested by the planning inspector are needed to make the LPPU sound (the government sets out the tests of soundness against which Local Plans are judged) and allow it to be adopted.

Councillor Tim Ball, cabinet member for Planning and Licensing, said: “The proposed LPPU plays a major role in addressing the climate emergency. If it is adopted, our policy framework will be at the forefront nationally because it includes some ground breaking policies relating to sustainable/zero carbon construction, renewable energy and Biodiversity Net Gain.

“In his letter to us, the inspector confirmed that, without prejudice to his final conclusions, he is likely to find the plan sound and legally compliant, subject to the modifications. That is excellent news.”

The decision to agree that the main modifications go out to public consultation should have been considered by Bath and North East Somerset Council at a meeting on 15 September.

That meeting was cancelled and given the time critical nature, the decision was delegated and approved by Sophie Broadfield, Director of sustainable Communities, in consultation with Group Leaders and the Chair of the Council.

The consultation will start today (21 September) and run for six weeks. It will close on 2 November 2022. You can take part in the consultation on the council’s website here: https://beta.bathnes.gov.uk/local-plan-partial-update-consultation

Detailed proposals for the preparation of a new Local Plan were due to be considered by cabinet at the meeting on September 8. As that meeting was postponed, a Single Member Decision will be made by Councillor Tim Ball, cabinet member for Planning and Licensing, not before September 24. If approved, the Local Plan Launch Document will then be subject to consultation and will start a period of ongoing engagement with communities, partners and stakeholders which will continue until autumn 2023.

You can find more information on the Local Plan and Local Plan Partial Update on the council’s website.