Improving Temple Street in Keynsham – have your say 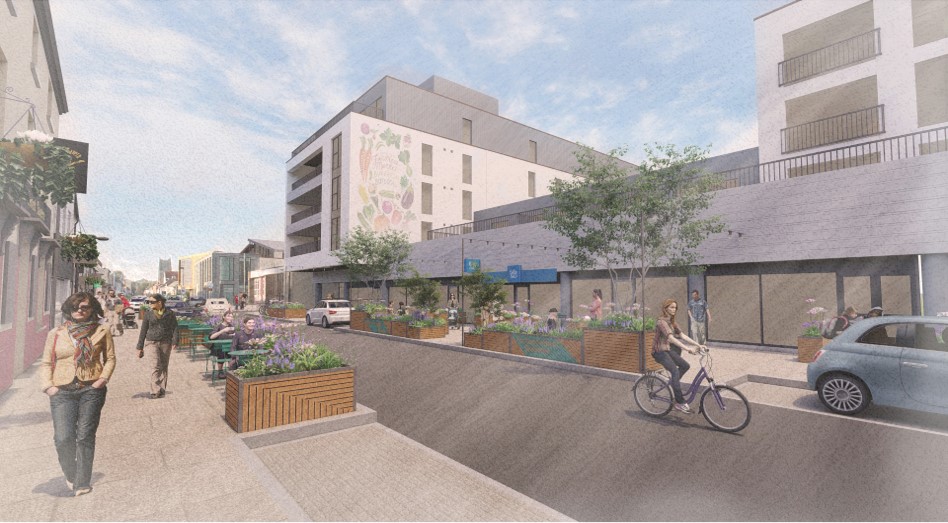 Residents in Keynsham are being asked how they would like Temple Street to look in the future.

Concept design proposals to make the area more attractive, engaging and vibrant while enhancing its historic identity have just been released as part of the Keynsham Heritage Action Zone (HS HAZ) Programme.

Landscape Architects Macgregor Smith have worked with the project partners and members of the local community to create the proposals for Temple Street which will now go out to public consultation.

Councillor Richard Samuel, Deputy Leader of Bath & North East Somerset Council and cabinet member for Resources and Economic Development said: “The concept designs have been inspired by Keynsham’s past and aim to strengthen Temple Street’s identity as an independent part of Keynsham’s High Street while promoting sustainable economic and cultural growth and improving quality of life in the town centre.

“We want to celebrate Temple Street’s historic character while making it a more appealing and vibrant place to visit by improving the streetscape, particularly around the historic terrace of shops and the Grade II listed Trout Tavern.  We also want to reduce the dominance of Riverside, revitalise underused spaces, green the street with planting and trees, improve accessibility and the street’s connection to key areas in the town such as Memorial Park.

“We think these initial concept proposals address these issues, but it’s important local people shape their own community which is why I’m urging people to get involved in the consultation and help inform the detailed design proposals.”

During the six-week consultation, which runs from Tuesday October 12 – Monday 22 November, a series of drop-in sessions and physical and virtual meetings will be held for residents, businesses and community groups to provide feedback and have their voices heard. This includes in person sessions drop-in sessions anytime between 13.00 – 16.00 on the following Thursdays; 14 and 21 October and 4, 11 and 18 November 2021. Further details about these sessions and can be found on HiKeynsham.co.uk  under the ‘What’s On’ section, more digital and in person sessions will also be added here soon.

Councillor Andy Wait, Chair of Keynsham Town Council shared: "Temple Street has a huge potential to become something very special in Keynsham. The first step in this renaissance is the upgrading of the public spaces on the street. Please take the time to look at the proposed upgrade and comment. This is your chance to give an opinion on the changes suggested. Your views count. It isn't too late for these ideas to change".

A digital version of the proposed concept designs and online feedback form can be found on our webpage.

Hardcopy versions can be viewed at Keynsham Town Council, Temple Street Canteen and Keynsham Library. Paper copies of the feedback form can also be collected from these locations.

Further details about Keynsham’s HS HAZ can be found at HiKeynsham.co.uk