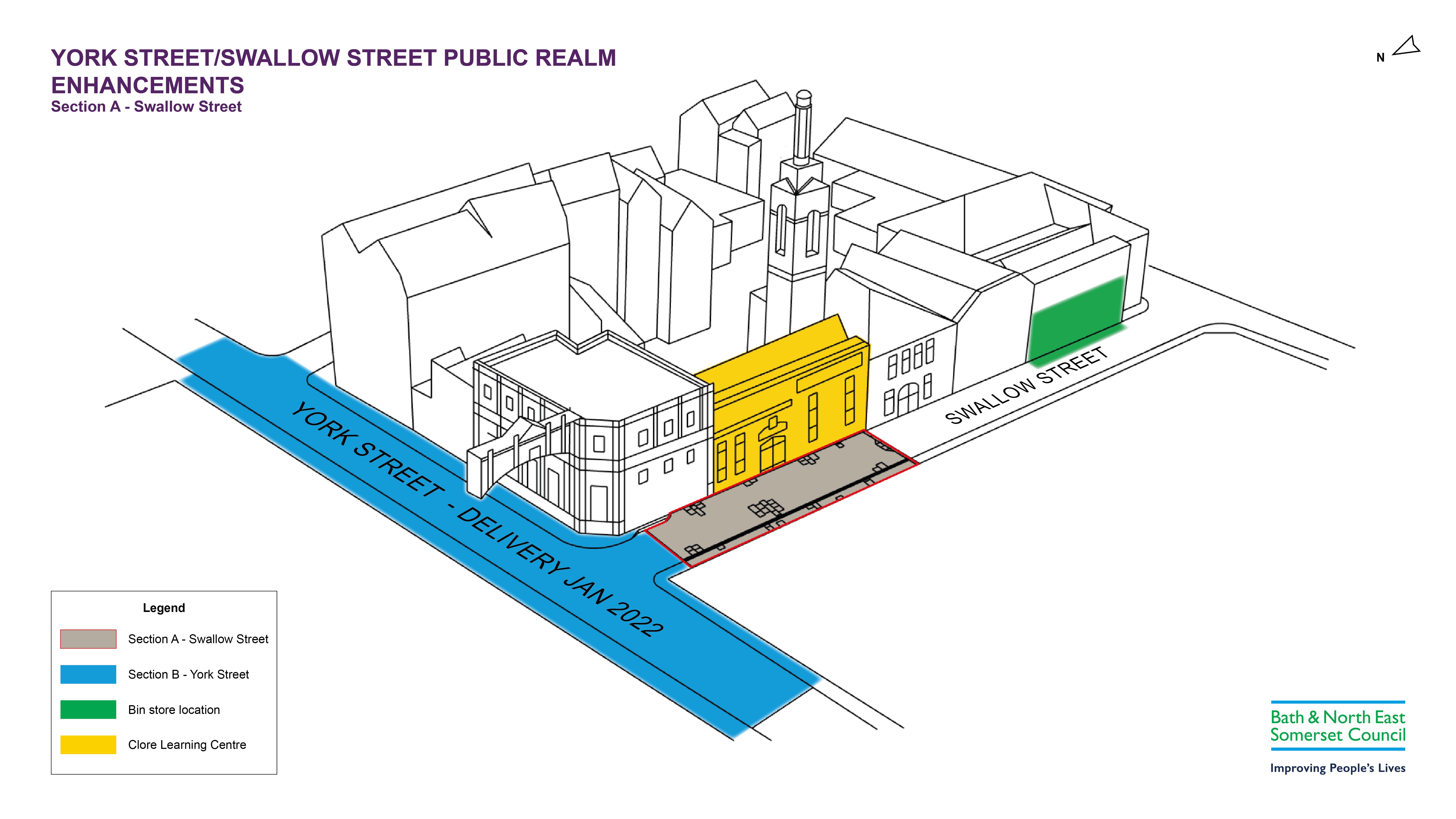 The first phase of public realm works to complement the opening of Bath’s new state-of-the-art World Heritage Centre and Clore Learning Centre are set to start on June 28.

The World Heritage Centre being created by Bath & North East Somerset Council aims to inspire local people and those from further afield to explore what the City of Bath’s World Heritage Site has to offer.

The Roman Baths’ Clore Learning Centre will provide enhanced learning facilities for school visits and community groups, and the opportunity to explore parts of the Roman Baths that have never been opened to regular public access before. Both centres are due to open later this year.

A safe and accessible entrance for the Clore Learning Centre is needed before it can open, so the council will complete a small section of works in Swallow Street from June 28 to facilitate this. Works are expected to take ten weeks.

A second phase of works along the section of York Street between Kingston Parade and Stall Street will be carried out in January 2022, and these designs will be subject to public consultation this summer. A bin store to house the wheelie bins at the south end of Swallow Street is also proposed.

The public realm scheme seeks to enhance visitor experience to this special part of the city and aims to make the area fully pedestrianised, allowing people to move around the area more safely.

The area has been closed to vehicular traffic under a temporary traffic regulation order since 2017 to protect the structure of the highway, but proposals to make this arrangement permanent will be consulted upon in the coming weeks.

The area will be resurfaced in a high-quality pennant stone, in keeping with the historic streetscape, and the carriageway will be raised to create a level surface throughout. The public realm will tie into Stall Street, Kingston Parade and Abbey Street allowing people to move smoothly throughout these spaces.

Along with a new surface treatment, the installation of new street furniture and landscaping also forms part of the current proposals.

The site falls within the City Centre Security Project area but is subject to a separate decision-making process. Whilst the York and Swallow St public realm scheme is discrete and independent of the City Centre Security Project, if approved for implementation it will support the council’s aim to improve the safety and quality of the Bath’s streets and public spaces.

Councillor Richard Samuel, Deputy Leader and cabinet member for Economic Development & Resources, said: “The works at Swallow Street are a relatively small but very important part of our project to make not only the World Heritage Centre and Roman Baths Clore Learning Centre accessible for all visitors, but to improve the quality of the public realm in the historic heart of the city. We are looking forward to welcoming school visits in September and we know from speaking with local businesses that they would like to avoid disruption during the busy summer period, hence the two phased approach to the construction programme.”

“The World Heritage Centre and Clore Learning Centre are set to be an enriching and exciting addition to Bath that will help the city to recover from the effects of the pandemic by encouraging more footfall and therefore increased trade.”

The Clore Learning Centre has been named to acknowledge the generous grant given by the Clore Duffield Foundation towards the project.

Stakeholders including local businesses and residents, the Active Travel and Accessibility Forum and the Independent Equalities Advisory Group have been invited to provide feedback on the forthcoming works in Swallow Street as well as the overall aims of the public realm project.

They will also be invited to feedback on the subsequent design proposals as the scheme evolves The Equalities Impact Assessment for the Swallow Street work can be found on the council website here. The EIA will be updated as designs for York Street and other elements of scheme come forward.

The works on Swallow Street are anticipated to take place Monday to Friday, between 8am and 6pm, and on Saturday between 8am and 1pm. The highway will continue to be restricted under the existing temporary traffic regulation order and will be subject to pedestrian controls including temporary walkways to facilitate works, preserve safety and retain access to property.

The works are due to be completed by the beginning of September.

You can find out more about the public realm proposals and how to comment on them here. Details of the proposed Traffic Regulation Order to support the permanent closure of the roads will also be available in due course.

Find out more about the opening of the World Heritage Centre and Clore Learning Centre at https://www.romanbaths.co.uk/archway-project