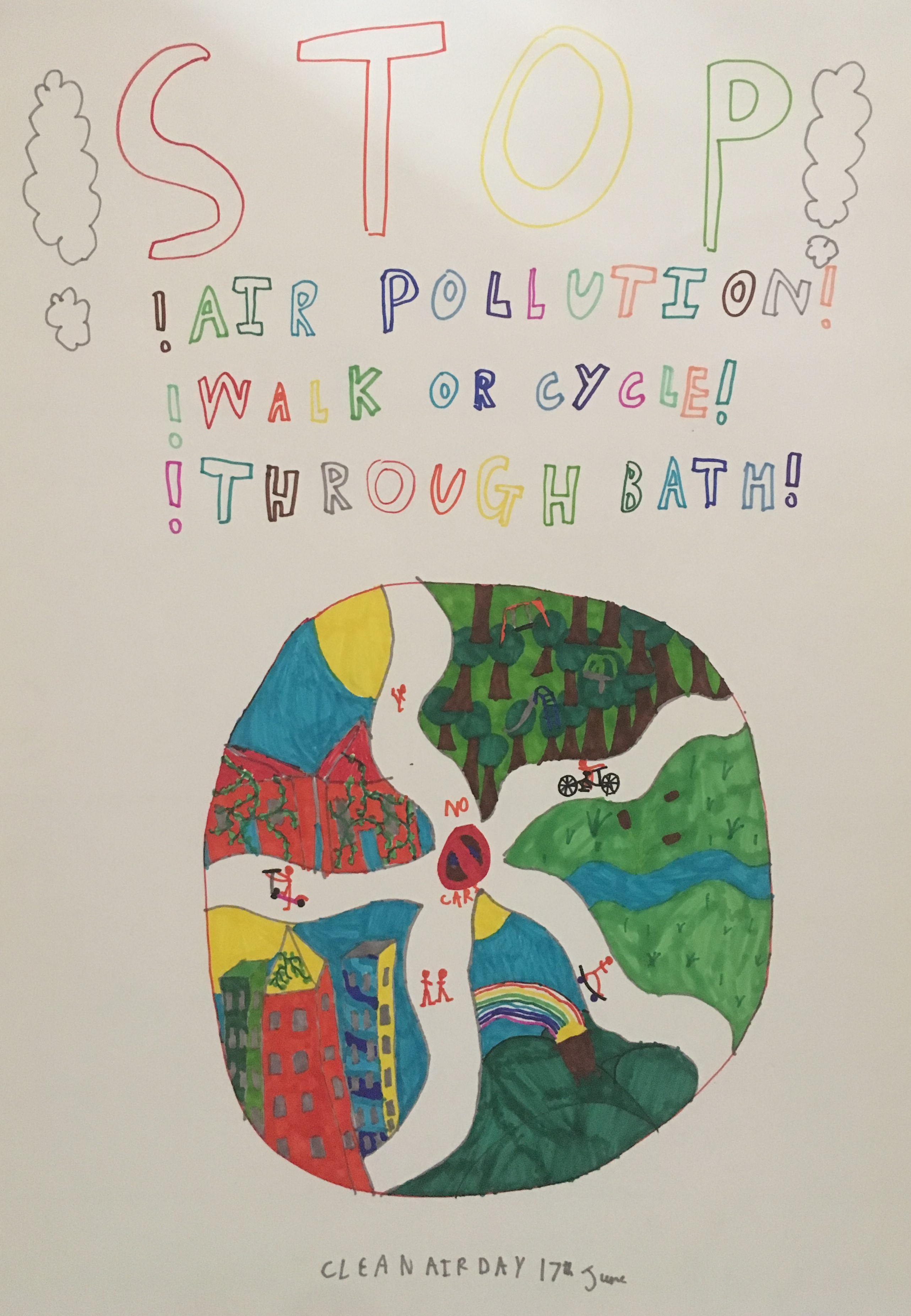 A pupil from St Stephen’s School in Bath has won first prize in a school poster competition run by Bath & North East Somerset Council to help raise awareness of the dangers of air pollution and what we can all do to tackle the problem.

The colourful winning entry, designed by Lois, aged 8, urges people to ‘stop air pollution by walking or cycling through Bath’, which is a timely message for residents as the city faces up to the challenge of tackling harmful levels of air pollution in the city by the end of the year.

Sarah Warren, Deputy Leader and Cabinet Member for Climate and Sustainable Travel, said, “The poster competition has helped to raise awareness of the dangers of vehicle emissions on children’s health. We were delighted to see so many impactful and informative posters, particularly around the importance of walking and cycling our shorter journeys.

“The city has recently launched a charging clean air zone to help tackle emissions from the city’s most polluting vehicles, but cars are not charged. Our job now is to encourage more people to voluntarily change their travel habits for the good of their own health and for the sake of our environment. Leaving your car at home when you can easily walk or cycle a short journey instead is one way – and it’s the clear message contained in the winning poster, and in the runners up.

“Children are still developing their organs and immune systems and their smaller bodies and airways make them especially vulnerable to dirty air. Because of their size, children are also often closer to sources of air pollution, like car exhausts, than adults. Air pollution can play a part in causing asthma, and for children who already have asthma, high levels of pollution can make it worse and trigger attacks. Children’s lung function development can also be affected in areas with high air pollution.”

The first prize of £200 in book tokens was awarded to St Stephen’s School, Lansdown for Lois Rodgers’ entry urging people to ‘walk or cycle through Bath’. The second prize of £75 in tokens was awarded to Weston All Saints Primary, for 10-year-old Helena’s thought-provoking poster ‘Whatever you were thinking about, it can wait…’; and the third prize of £25 in tokens went to St Mary’s Primary School, Timsbury for Lily’s poster (year 4), which urges people ‘not to drive when they don’t need to’ and to consider indoor pollution, by ‘opening windows when cooking’ and avoiding the use of aerosols.

Winning artist, Lois, aged 8, from St Stephen’s School, said: “Everyone should be able to breathe in clean air. Fewer cars should drive through Bath”.

The competition was run in partnership with Families Acting on Climate Emergency (FACE) and the Schools Climate Network and was judged by their representatives.

Pauline Harris, from Families Acting on Climate Emergency said: “Children can be much better than adults at getting a message across loud and clear. They are urging us to take action and change our habits, to leave our cars at home, to think twice before lighting stoves and bonfires, and to reduce pollution both indoors and outdoors. We've got no excuse not to listen to them. It's children that are most impacted by pollution, but it's up to us adults to do everything we can to protect them from it.”

The council aims to reduce high levels of nitrogen dioxide in the city to within legal limits by the end of the year and is urging everyone to do their bit. It will release its first performance report on the Clean Air Zone in the Autumn. This report will assess the zone’s performance so far, including air quality monitoring and traffic data during the first three months of operation. The council is also monitoring road traffic and air pollution outside of the zone where concerns have been raised about displacement of traffic and pollution. An update will accompany the first quarterly report.

Find out more about the Clean Air Zone